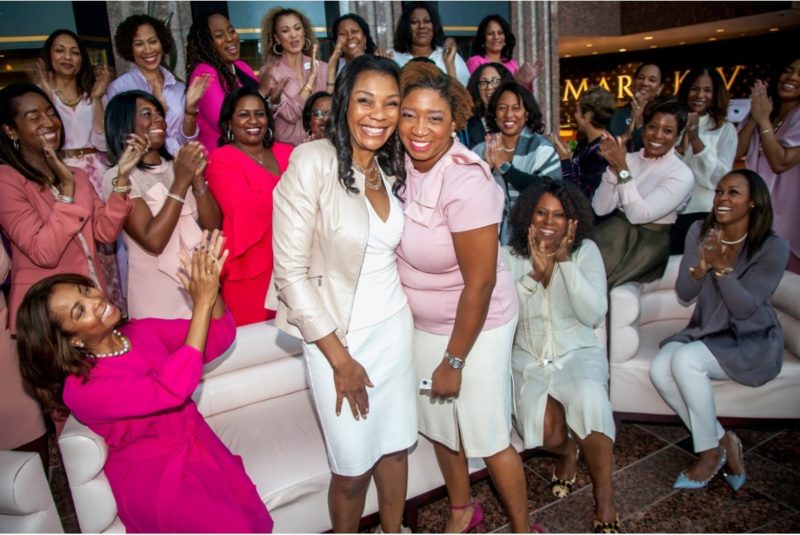 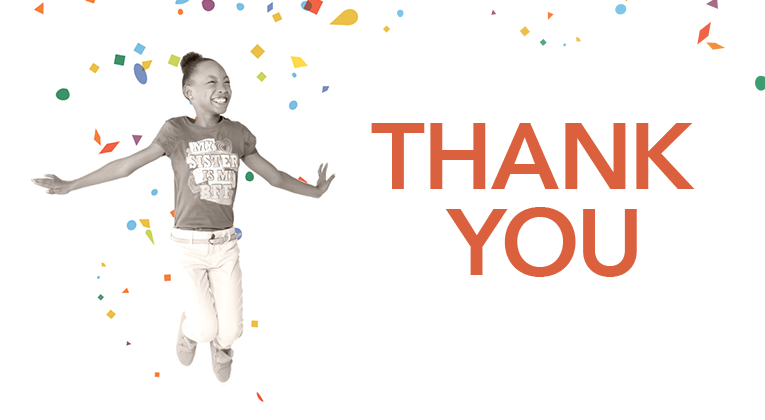 Thanksgiving is upon us, and that essentially means the year is on its way into the history books. So this is a great time to take stock, to reflect on the positives in our lives. It’s the season to be grateful.

What are you thankful for? We pose the question to you, our Big Thought supporter, donor, friend, teaching artist, student and parent. All of us at Big Thought wish you and your family a happy and safe holiday spent among loved ones. Great food on the menu doesn’t hurt, either.

So what are we thankful for? Below find expressions of gratitude from some of our Big Thought staff members.

I am thankful for life, freedom, family and a place that I like to go to for work each and every day.
Kristina Dove, Program Manager, Partner Relations

I am thankful for spaghetti squash and persimmons being in season, and the power of a really good hug.
Leila Wright, Senior Program Manager

I am thankful for the love that I am surrounded with from friends and family.
Katelynn Dougan, Specialist, Corporate Development

I am grateful for each day and the love of family and friends.
Sally Hartman, Board Administrator

I’m thankful to have the opportunity to be part of this great family that is Big Thought.
Jose Sosa, Manager, Communications

I am thankful that I am not a turkey.
Anne Leary, Major Gifts Officer

I am grateful for the breaths I take, for the beauty that surrounds me, for the melodies that fill my spirit, for delightful kinships along my life’s journey. For today to be of purpose in the universe, is my prayer of Thanksgiving.
Mary Hernandez, Community Engagement Specialist

I am thankful for my health and all of my family.
Maria Tafalla, Receptionist

I am grateful for the circle of life. The blessing of our new baby boy during the same year when we lost our two elderly next door neighbors 9 months apart from one another. I am also thankful that my mother in law beat cancer this year. That my father is healing well after his emergency quadruple bypass. And I am especially Grateful for all of those in our community who have embraced me and my wife and kids this year – and of course, our extended familia. I am thankful for family – by blood and by association. Our village is strong, no doubt.
Will Richey, Creator, DaVerse Lounge

I am thankful for family and friends who are near and far.
Shannon Linton, Operations Project Coordinator

Inhaled. Exhaled. How many times have I done that today? I am thankful for each breath of life.
Phyllis Walker, Senior Manager, Human Resources Operations

I am thankful for each and everyday I wake up. As with each morning the opportunity of life is at my door allowing me to live, laugh, and love until my heart’s content. Anything is possible!
Sarah Matthews, Specialist, Development Operations

I am thankful for finding joy in the journey.
Bill Wetsel, Senior Manager of Accounting

Big ThoughtQuestion of the Season: What Are You Thankful For?11.22.2016
READ MORE 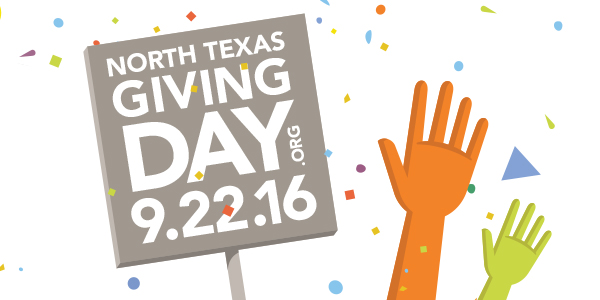 A New York Times story from December 2015 analyzes the “feel-good school of philanthropy,” which falls into two baskets of motivation. There is effective altruism, which uses hardcore scientific data to calculate and show people exactly how to ensure the impact of each dollar they contribute.

Then we have the emotional high of giving, of finding heartfelt satisfaction in improving the lives of others through persistent financial support. That high is good for the soul.

“Emotion may also make altruism healthier,” writes Jamil Zaki. “Generosity not only makes givers feel good, but reduces their stress level and even extends their lives.”

Which brings us to North Texas Giving Day, the annual local celebration of philanthropy that begins at 6 a.m. Thursday, Sept. 22, and ends as the clock chimes midnight. NTGD is your chance to support Big Thought.

At Big Thought, our goal is to bridge the opportunity gap by bringing quality, imagination-based programming to 150,000 under-resourced students across 433 sites in Dallas. We do this everyday with the top-of-mind realization that every child deserves a great education.

Together with our many partners, here are some of the enriching programs we provide:

Dallas City of Learning – A public-private citywide partnership with the City of Dallas and Dallas ISD to ensure all students have access to summer learning opportunities that stems summer learning loss. In the course of three years, with the help and guidance of approximately 150 partners, the DCoL initiative provided programming at over 100 locations, serving approximately 50,000 students.

Creative Solutions – A partnership with the Dallas County Juvenile Department and Southern Methodist University to create performing and visual arts programs for disengaged youth in the juvenile system and lower the recidivism rate. Since its inception in 1994, Creative Solutions has helped 12,000 students find their way back after being convicted of a crime and experiencing probation.

Learning Partners – An initiative that provides public school educators with access to thousands of imaginative, high-quality programs and field trips to help teachers bring learning to life in the classroom. In 2015, nearly 83,000 students benefitted from Learning Partners with more than 1.5 million total hours of programming.

DaVerse Lounge – A cultural movement that’s a partnership between Big Thought and Journeyman Ink with generous support from TACA. DaVerse Lounge creator Will Richey is the mastermind behind this spoken word program that empowers youth by giving them a voice. DaVerse Lounge events, coupled with the DaVerse Works poetry clubs and curriculum in schools, take place at Life in Deep Ellum. This year we have 6 shows – Oct. 7, Nov. 4, Dec. 2, Feb. 3, March 3, and April 7.

See all that giving can do? So whether you are fueled by the emotion or the science, the end results are the same. Your contribution will make a huge difference in the lives of others. Giving is definitely good. 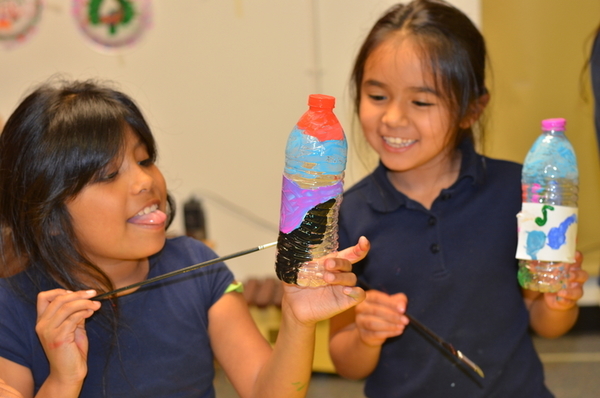 Experience learning outside of the classroom!

Explore a world of possibilities at Discovery Faire, the first of three Turn Up! events during this year’s Dallas City of Learning initiative. Discovery Faire features a variety of activities for kids including arts and crafts, 3D printing, music, science experiments, robotics, visual arts, aerialist performances, and so much more.

And kids, this is your chance to earn DCoL credentials. Complete any one activity and you got an XP. But why stop there? Complete any five activities to make your Discovery Faire experience a DCoL Playlist and you have yourself a digital badge.

So take your pick. Here’s a list of the activities:

Discovery Faire is open to the public. Parking and admission are free.

Dallas City of Learning, which aims to beat the opportunity gap that disproportionately affects under-resourced children in Dallas, is a true public-private citywide commitment convened by both the City of Dallas and Dallas ISD and managed by Big Thought. DCoL is supported by a large network of organizations such as museums, libraries, parks, rec centers and neighborhood organizations. Our goal is to spark imaginations while reversing cumulative learning loss.

Big Thought thanks its DCoL donors for their generous support. For a full list of donors, please visit bigthought.org/dallascityoflearning. 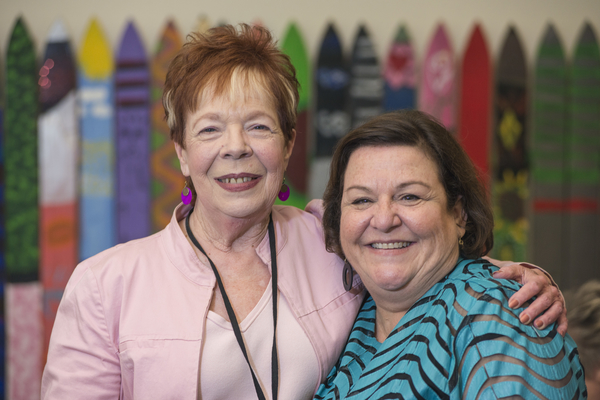 Anniversaries make for great parties. Yes, they certainly rejoice the togetherness of the people celebrating the milestone. But they also create a seamless sense of family. Anniversary parties bring out familiar faces from the past, mingle with the present, and extend open arms toward the future.

We at Big Thought recently feted two very important women to the past, present and future of this organization – Gigi Antoni and Sally Hartman. Antoni, our Big Thought President and CEO, and Hartman, our Board Administrator, celebrated 25 years of service during a lively and well-attended gathering Thursday, June 2, 2016 at the Big Thought headquarters.

The occasion brought out 76 guests, including past board members and former staffers, as well as the honorees themselves, of course. We also had the privilege of seeing Mitch Jericho, 94 years young. Jericho co-founded Young Audiences of North Texas in 1987, which became Big Thought in 2004. She also hired Antoni back in 1991. Her presence was inspirational.

So was recounting the many ways that Antoni and Hartman brought Big Thought into the present, making it one of the most recognized and respected educational nonprofit organizations in the country.

“That dynamic duo worked so well and launched this new era of Big Thought that we have today,” said Melissa McNeil, event co-chair, during a presentation.

Larry Whitt, also an event co-chair, referred to Hartman and Antoni as Academy Award winners. He named Hartman best supporting actress and Antoni best director. By the time Antoni and Hartman got up to speak, emotions were jubilant.

“As I said on my 15th anniversary, I have no plans to retire,” said Hartman, who has endured cancer and deaths of loved ones while at Big Thought. “Big Thought has supported me like a true family. I told Gigi one time that I’m going to be the first 90-year-old Big Thought receptionist. She rolled her eyes and said, ‘Oh good.’”

Antoni immediately thanked everybody in the room, and offered heartfelt words about Big Thought’s lasting impact. “You were the people that helped me find my way in the world and the mission for my life,” said Antoni. “I am surrounded every day by like minded people with such passion. That is a tremendous honor.”

See below for a comprehensive list of the guests at the 25th anniversary celebration of Big Thought’s Gigi Antoni and Sally Hartman.