Earlier this month several young men from The Fellowship Initiative had the opportunity to take in a bit of theatrics with City of Dallas Office of Arts & Cultural partner, South Dallas Cultural Center. The Fellows had the opportunity to get up close and personal with the production crew and cast of Dot. Presented by Soul Rep Theatre Company , Dot is a heart-warming and heartbreaking stage play confronts a family who must come together while coming to terms with the matriarch’s illness and decline. The evening started with a “ClapBack” where subject experts held a round table Q & A session on how to recognize signs of the disease and ways to find support through various resources in Dallas.

Chase Fellow Mentor, Ronald Lewis, shared his own personal experience of dealing with the disease. TFI Program Manager Sean Walker stated that his family had dealt with finding care for loved ones and although the Fellows might not be facing this in their home now, they will be well prepared when it comes up. Dot runs through December 22, and don’t be surprised if you recognized one of the actors, Dallas City of Learning’s very own Program Manager Sergio Antonia Garcia as “Adam,” Garcia’s character becomes the balance to the family offering support to the entire family during the life changing events.

Big ThoughtThe Fellowship Initiative engages in an evening of culture while learning ways to cope with family changes.12.20.2019
READ MORE 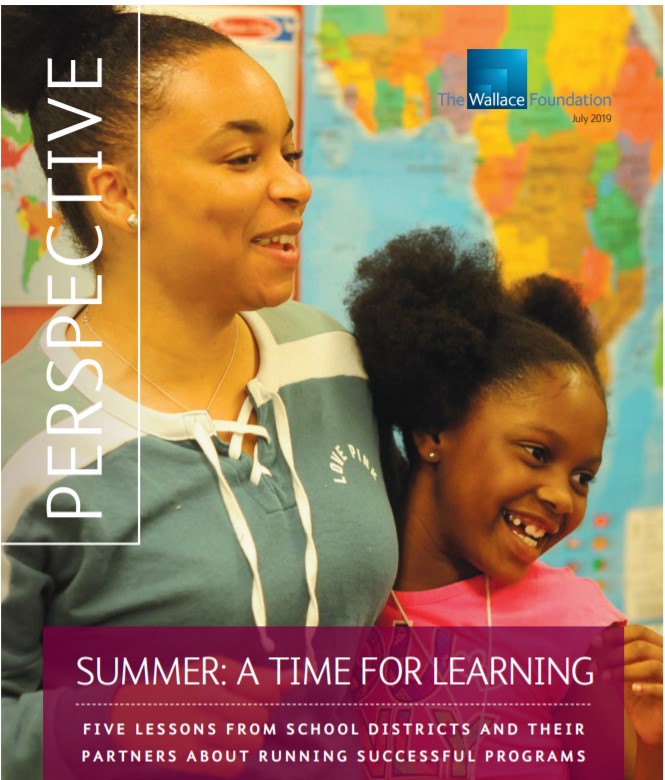 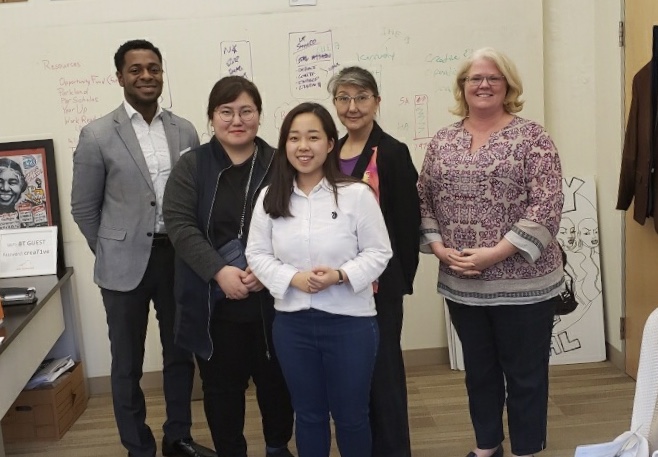 Big Thought recently met with special guests Hyo Won Song and Soyeon Lee from the Korea Arts and Culture Education Service (KACES) to share common visions, challenges and best practices in youth development and arts and cultural education.  KACES is a public agency in South Korea under the Ministry of Culture, Sports and Tourism dedicated to the development of people’s creativity, enhancing the quality of life and reinforcing national cultural capability.  In 2014, Big Thought partnered with KACES facilitating a cultural exchange and teaching artist workshops in Seoul and Gyeongju. 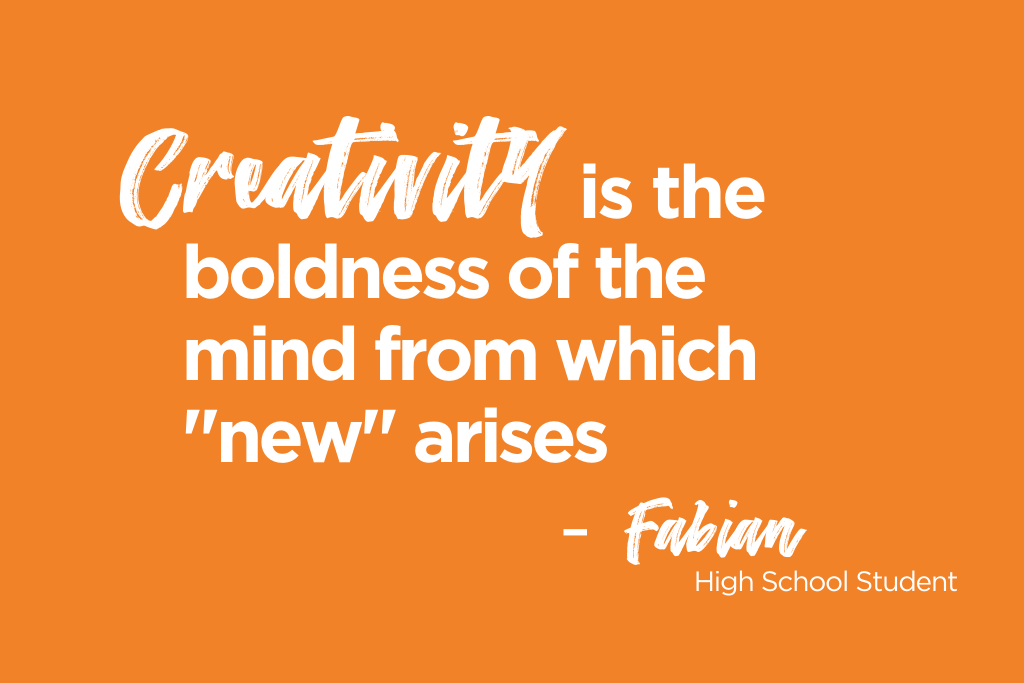 In analyzing the value of creativity in today’s world, I have come to the conclusion that we, as a society, have a moral obligation to not only be creative, but to ensure that the products of creativity are accessible. Throughout my investigation, the social responsibility to creativity hasn’t been expressed outright; instead, it can be illustrated through one specific psychological theory.

When psychologist Lawrence Kohlberg crafted his theory of moral development, he prompted the Heinz Moral Dilemma. Essentially, a man is in great need of an expensive drug thought to cure his wife of cancer. After appealing to family, friends, and the pharmaceutical company itself, he only raised half the money necessary to pay for the cure. Faced with his wife’s life or death, he decides to steal it. Kohlberg used this example to provoke further questions of just versus unjust laws, morality, and authority.

However, I would like to apply the Heinz Moral Dilemma to questions about society’s fulfillment of creativity’s moral duties: who is the status quo working for? (it certainly wasn’t for the man trying to raise money to afford a cure). The pharmaceutical company demonstrated incredible creativity in developing the medicine, but without access to it, the drug didn’t do the wife any good. What benefit (and therefore value) does creativity (and therefore progress) have if the people that truly need it don’t have the means to acquire it?

This example doesn’t advocate for a halt in creativity; rather, it encourages the increase of its moral standard. Creativity must be deemed a moral obligation – as a society, we can’t advance without it – but so must its accessibility. And the Heinz Moral Dilemma is not just confined to the realms of medicine; it can be attributed to the American status quo, as well.

To say that mainstream systems “work” for American society is to disregard the people it doesn’t work for; the value of creativity is in the multitude of efforts to counteract the systemic inequity and societal inequality we face now — progress inherently necessitates innovation. And innovation necessitates creativity. Our existing state of affairs, as it operates now, is nowhere short of creativity. However, it seems that bystanders deem our current societal values and systems, for lack of a better word, acceptable. For the ultra-rich, buying the cure to cancer is hardly a moral dilemma at all. For Heinz, the problem was only a moral one. Creativity is the solution, and organizations that work to make Creative Solutions accessible, like Big Thought, are its agents of change.

To better understand my own generation’s perspective, I reached out to six other seniors in an attempt to link the collective “value of creativity.”

As my peers sent me their responses, I noticed that half of them used the word “allow.” Creativity “allows” for the “breaking of boundaries,” collaboration, growth, inspiration, and “critical thinking and spontaneity.” In other words, creativity is a necessary stop on the way to something bigger, an integral piece to the development of personal and social learning, creating far-reaching ripple effects in our community. That’s why Big Thought works. Its programs align with why youth value creativity. On the intersection of social and emotional learning (incorporated into each program) and individual and community progress (as defined by its North Star), Big Thought is always on the move.

My peers and I agree: creativity’s value lies in its potential, advancing society in its ability to enable people to more easily “switch perspectives,” providing empathy in a severely-desensitized world, as well as its “driving force” characteristic, encouraging people to create profound impacts within their community.

Creativity is valuable because it is a core component of both personal and societal advancement. We have a moral obligation to be creative and to make certain that creative solutions are accessible. It is, and always will be, the expressway into the future; organizations like Big Thought are its trusty vehicles. 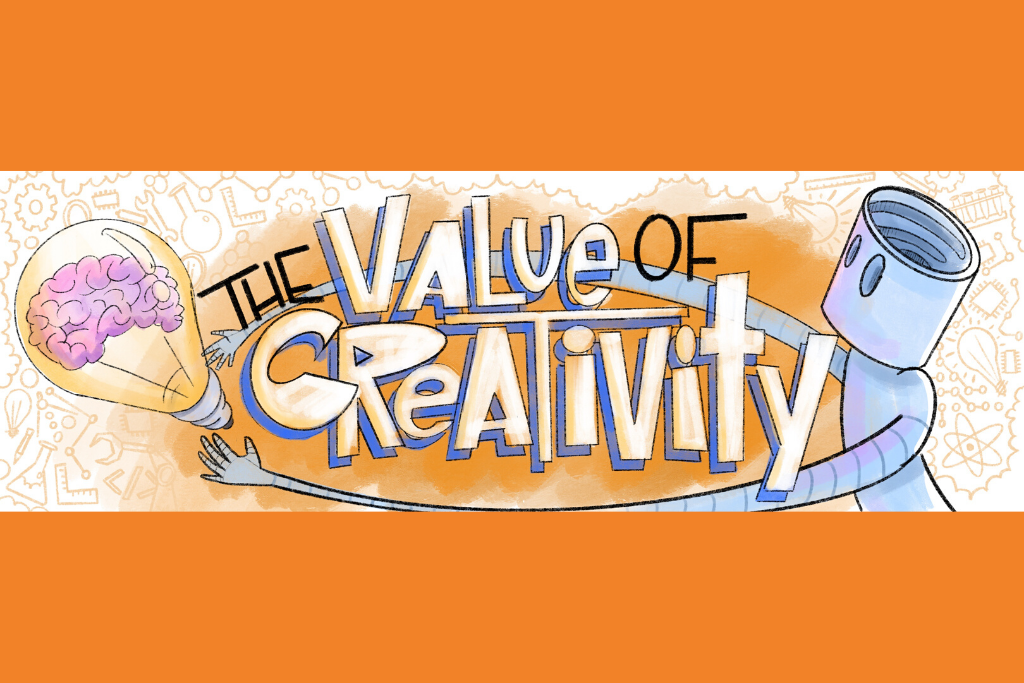 Most often when one thinks of creativity an artist, actor, sculptor or other traditional fine arts related professions and disciplines comes to mind. But creativity lies within all of us, how we work, how we communicate, the choices we make and process information. Creativity is everywhere, part of our everyday and most of all a process of beginning, beginning again and when given the freedom to explore, it continues to evolve.

The 2019 Forbes Most Important Job Skills for the Future list places “creativity” as number five, while LinkedIn rates the skillset as number one. Other recent studies, like Gallup‘s recent report on Creativity in Learning, states the importance of developing, or “redeveloping one’s creative skill set” and design thinking. Whereas art disciplines are highly imperative and oftentimes the foundation of all learning, particularly fundamental learning, research and data shows that the ability to think creativity is essential in the future workplace.

More than 30 years ago Big Thought was established as an arts education organization to supplement the death/removal of arts instruction in school. Fast forward, our programs include are designed to strengthen the creative muscle of youth, develop social and emotional skills and well-being as discover and shape their authentic voice. 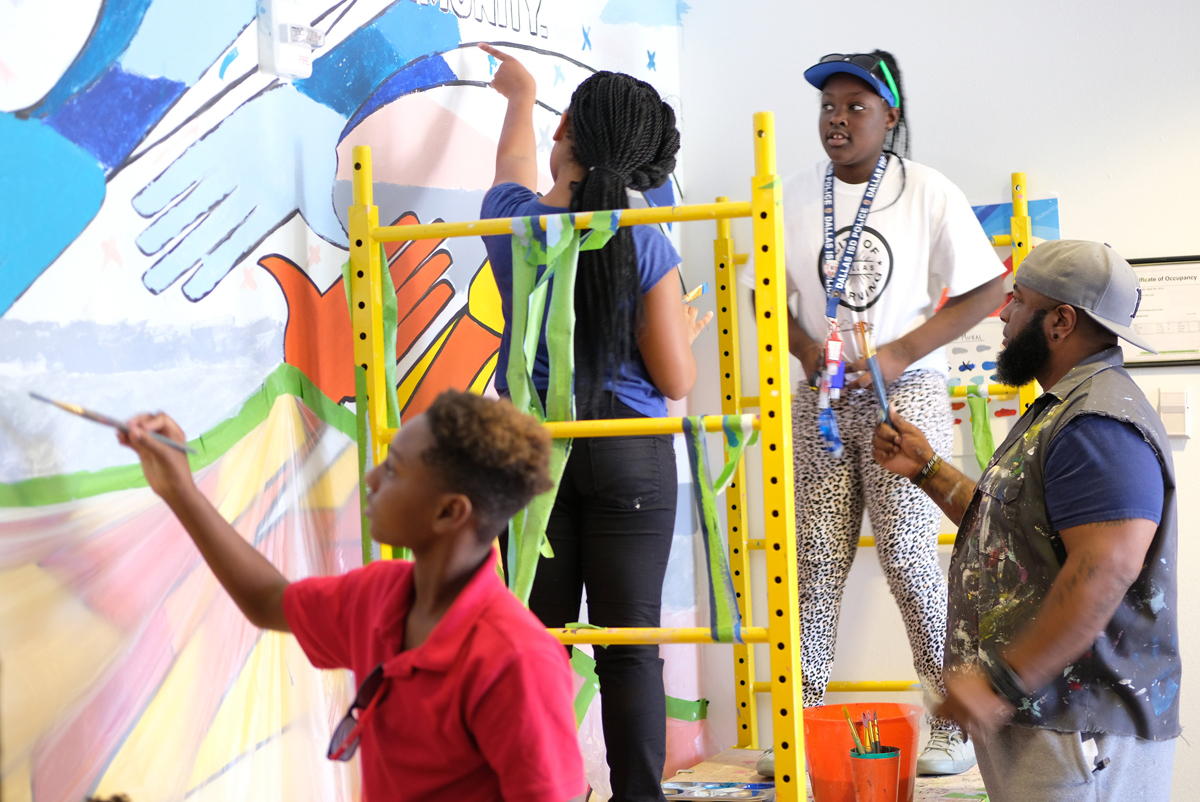 The West Dallas Community Center offers a variety of services including programming for senior citizens, healthy meals and education counseling offered by El Centro Community College. But apart from these offerings, the center functions as a meeting place for the neighborhood. Walk in and see locals chatting over coffee or people playing card games. The smell of home-cooked lunch waifs through the halls. This community center is welcoming and warm, yet the building itself didn’t reflect the energetic and diverse community that the center serves. But now that local muralists, Reggie and Sanah Bowers have arrived to work with students at Dallas City of Learning a whole new look welcomes visitors and showcases the vibrant personality West Dallas. 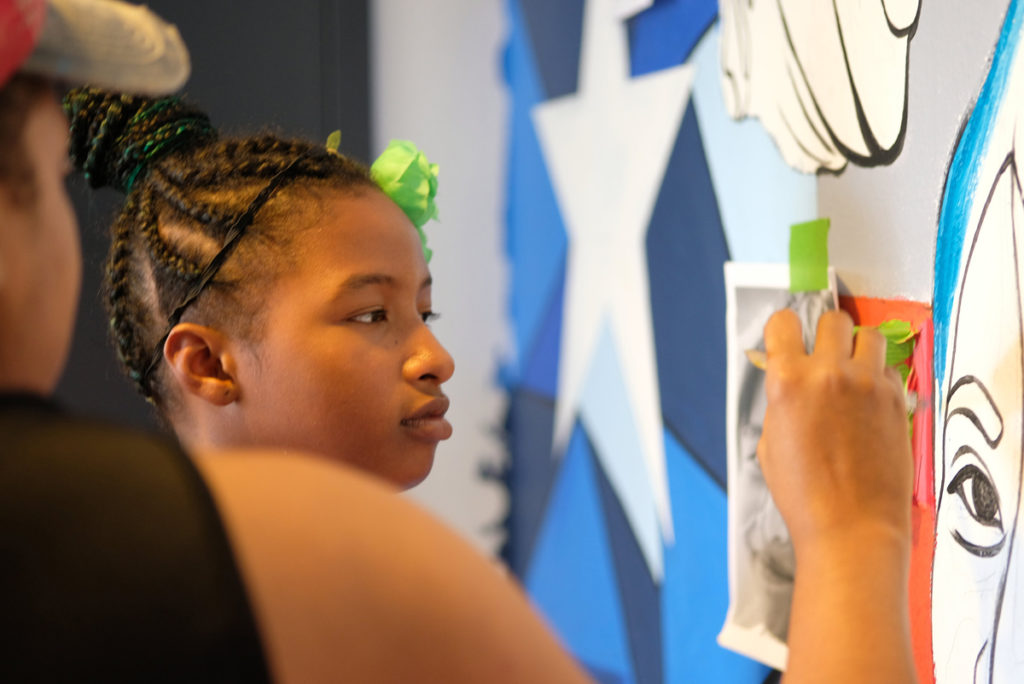 Reggie and Sanah Bowers are constantly seeking ways to do good in the Dallas community through their art. Reggie, a military veteran and artist, is currently working on a masters in Social Work and learned about Big Thought through a professor who knew of his passion around art and children’s well-being. Sanah, an experienced photographer and artist, heard about Big Thought for years and thought this would be good opportunity to get involved and work with kids in the West Dallas community. 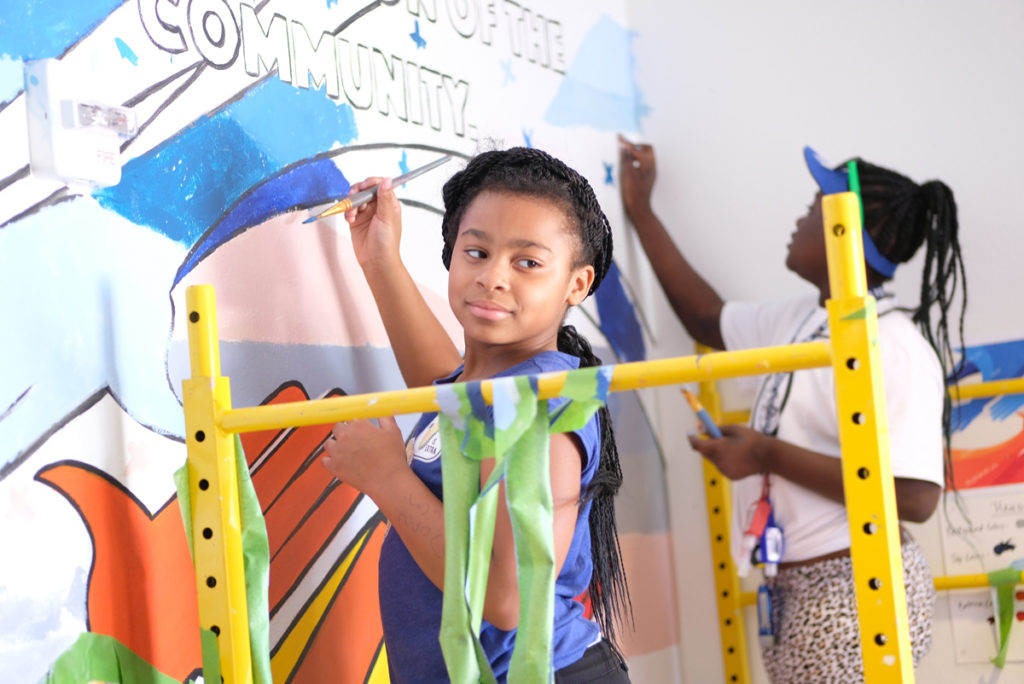 This led to both artists utilizing their talents to teach art through the design and development of three mural projects at the West Dallas Community Center. Some students had never taken an art class so the entire process gave students the chance to learn the foundations of art from professional artists. Inspired by the West Dallas community, Reggie and Sanah wanted each piece to be a direct reflection of the community showcasing the warmth, diversity and energy of the neighborhood. 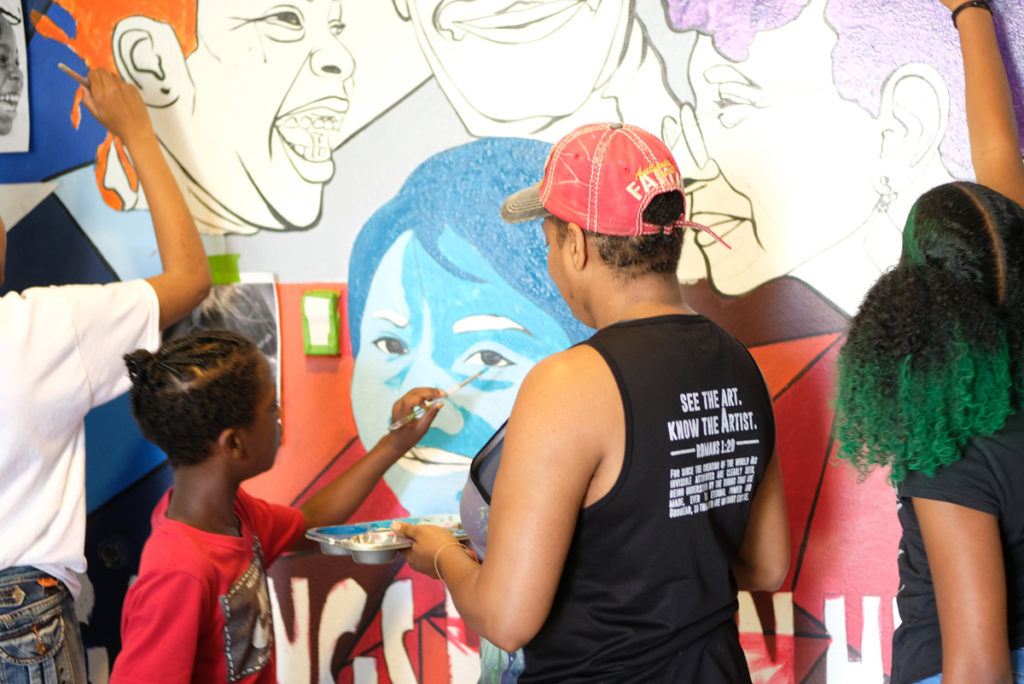 An average mural takes about 60 hours to complete, but with lots of little hands, Sanah emphasizes that painting three murals can be a little challenging. “The initial challenge was getting them to focus and not paint everything at once, but now they understand how to paint a mural.” Students loved coming to camp everyday to paint the murals and see how they change everyday. 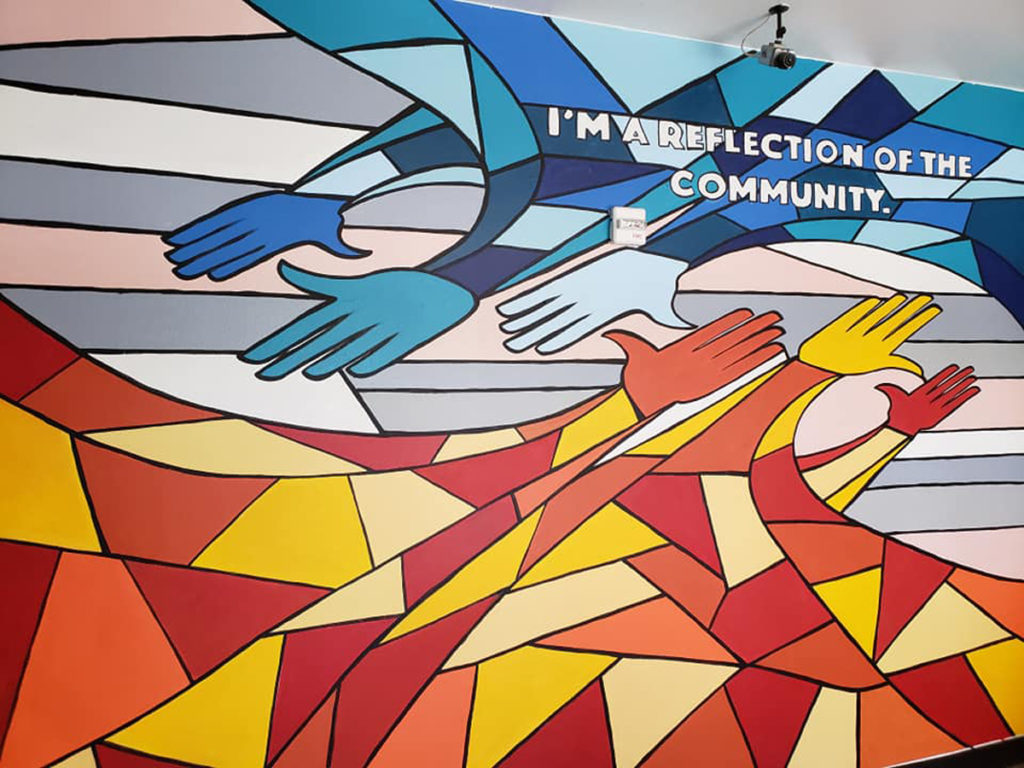 Reggie and Sanah agree that their overall goal for these murals was not only to teach art to students, but also to connect them to their neighborhood in a deep and meaningful way. Community members joined in on that goal by leaving notes filled with advice and encouragement for students. These notes will be incorporated into the murals to show community support and showcase its generous spirit. 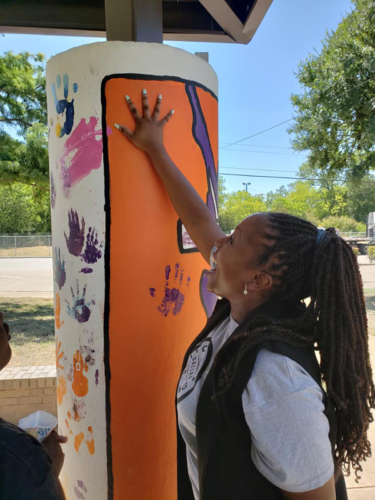 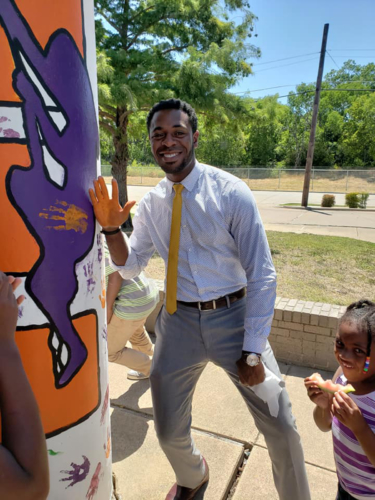 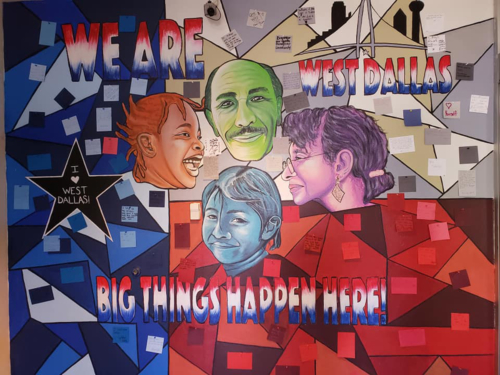 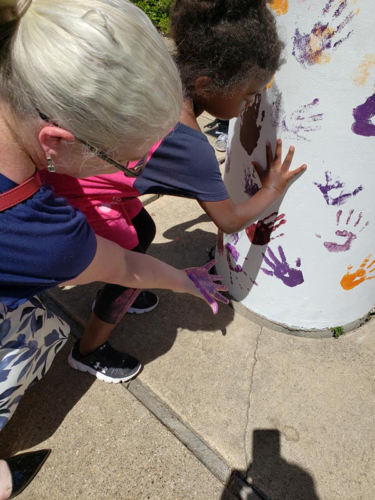 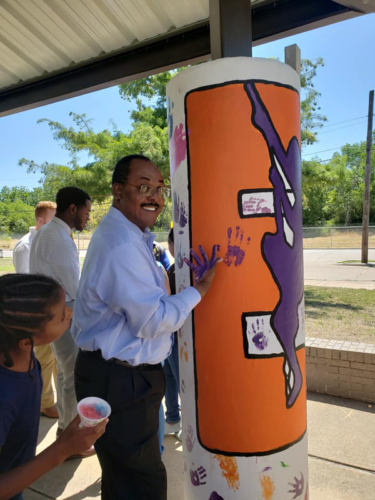 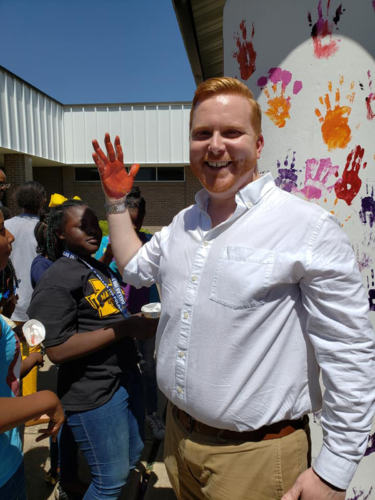 Now that these colorful murals have been completed visitors will instantly know that they are in a special place that is welcoming to all and committed to supporting education.

Looking for creative ways to teach your child more about art and culture? Check out learning opportunities happening across Dallas at Dallas City of Learning!

How do you build creative muscle? What are the top

@stemandthorn You never cease to amaze us! Thanks

Our @jpmorgan TFI Fellows had the esteemed opportu


Error: admin-ajax.php test was not successful. Some features may not be available.

Please visit this page to troubleshoot.