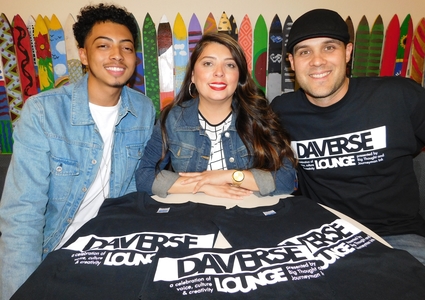 Marcus Villagomez was 7 years old in 2005, an impressionable kid sitting in the Dallas Theater Center audience for the inaugural DaVerse Lounge show. His mom, Brenda Villagomez, brought Marcus along with a van full of young ladies from the nonprofit organization Girls, Inc.

Eleven years later, Brenda and Marcus have attended nearly every DaVerse Lounge event. They know DaVerse creator Will Richey personally. They remember poems and poets by name. They’ve grown up and bonded thanks to DaVerse Lounge.

“Throughout my career,” says Brenda, who also worked for Boys and Girls Club from 2003-2015, “I was exposing my program kids to these new experiences right along with my son.”

For the Villagomez mother and son team, DaVerse Lounge has been a rite of passage. The shows and their empowering mantra – My voice has power to speak my truth and share my light – filled a void just as it promoted unity and conversation. Marcus, who never took the stage to perform, breathed in all of the social-emotional learning pixie dust permeating the DaVerse oxygen. Brenda nurtured a beautiful rapport with her son. Together they resiliently coped through divorce and abandonment with DaVerse as the uplifting backdrop.

“It’s all about expression,” says Marcus, who is now 18 and a senior at South Grand Prairie High School. “You hear the stories, what they have been through – sad stories, funny stories. As I got older and I started to understand more I started to understand the diversity of it. There is more than my life and my mom’s life. There are other people in this world that can have an impact on you and share their wisdom with you.”

The Villagomez meets DaVerse Lounge story dates back to the beginning of the new millennium. It was Brenda who first discovered Richey in 2002. She took her Girls, Inc. kids to see Maya Angelou at the Coliseum inside the University of North Texas at Denton. Richey was Angelou’s opening act.

“At that moment we all fell in love with Will,” says Brenda. “There was this huge connection to be a part of his life and his program right then and there. I later attended a poetry workshop led by Will at an Irving arts magnet school. At that workshop Will announced that he was going to start a youth poetry show. I knew I had to see that.”

She did see it, repeatedly. Brenda was always there, with Marcus by her side.

But this wasn’t just feel-good fandom. Brenda and Marcus found acceptance, boundless expression and, yes, even therapy at DaVerse Lounge. Marcus’ father walked out of his life when he was 6. So mother and son were dealing with emotions bottled up inside, emotions desperately in need of release. They embraced the welcoming, free-forum atmosphere of the shows. They became part of the firmament simply by being regular cheerleaders in the audience.

“At that point in our lives we didn’t talk much about what we were going through,” says Brenda. “I’m sure those brave kids didn’t talk about it either until they were on the mic. So we talked about it afterwards.”

Marcus agrees: “It brought us closer together. We were able to talk about what was going on in our lives because of DaVerse Lounge.”

Richey preaches the DaVerse Lounge gospel regularly, and not just when he’s onstage at Life In Deep Ellum, the venue that has hosted DaVerse Lounge since 2010. DaVerse Lounge’s “emotional literacy,” that ambiance of openness and fairness, is a balm for all ages, races and genders.

“I believe what we do is for everybody,” says Richey. “In more micro-managed households and families we are not allowed to speak out. So it takes a collective. It takes a village to raise a child, and it takes a collective to support an adult. We just need to express ourselves. The adults always do receive something.”

Brenda lives vicariously, in a way, through the DaVerse Lounge experience. “It is about giving the youth that outlet that they need,” she says. “We needed that outlet when we were kids, too, but we didn’t get it. Now we have it.”

This is all about the back and forth, the spirit of giving and receiving. Through DaVerse Lounge Marcus learned to give, which in turn allowed him to receive. Marcus now sports a short, curly coif. But back in 3rd grade his hair trailed passed his shoulders. That’s when he made an important decision. Two years later, with his mane down to his waist, Marcus cut it all off and donated it to Locks of Love.

Richey caught up with Marcus and Brenda after the 11th season closing DaVerse Lounge show April 1. As they all sat and chatted at Big Thought’s office last week the camaraderie, the exchanges were so casual, so genuine. These were old friends catching up.

“I used to know everybody; we were small and intimate,” says Richey. “Now because it is so big, to see people that you know is so special.”

Brenda and Marcus Villagomez are still around, and they aren’t going anywhere. DaVerse Lounge still has the same impact it did in 2005. Their DaVerse journey still resonates.

DaVerse Lounge thanks TACA, State Farm and the Dallas Mavericks for the generous support.