When COVID-19 reached Dallas, Tracy Lindsey, the director of student services at BridgeBuilders, knew the organization’s response would need to be quick. Located in Bonton, the ministry nonprofit serves individuals and families in South Dallas communities, which have been among the city’s most vulnerable ZIP codes during the pandemic.

“The neighborhood we’re in really doesn’t have the same type of advantages and services that other neighborhoods have,” said Lindsey, pointing out the lack of nearby grocery stores and Bonton’s status as a food desert. “The first thing that came to us was food.” 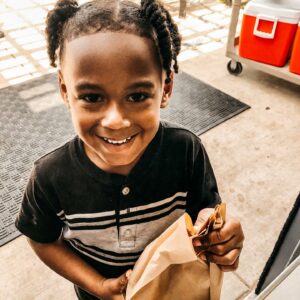 BridgeBuilders immediately began serving lunches to youth and seniors in the area — in July alone, the nonprofit and its partners provided more than 4,000 meals.

But the support didn’t stop there. Lindsey and his staff began calling local parents every few days, checking in on how they were doing and finding out what was needed. In some cases, it was access to the internet, so BridgeBuilders partnered with Spectrum to help deliver hot spots.

During the summer, the organization was also able to provide its virtual enrichment education (VEE) program through a partnership with the Noggin Educational Foundation. BridgeBuilders was able to safely space out learners throughout the building, and in small groups, learners were able to do their virtual learning on their Chromebooks.

This pivot meant programming that looked different than in past years, but the idea of doing nothing was never an option. “In March, when COVID hit, you have to understand: Our kids were behind anyway at school — we have fifth graders that can’t read,” Lindsey said. “So to be extra behind, that was something that we just couldn’t live with.”

The new-look summer involved measures like temperature checks, masks and limiting the number of students per room. For Lindsey, the importance of being safe was something he underlined again and again to his staff.

And while some of the summer may have seemed unfamiliar, with its lack of field trips and athletics, it was also a chance to learn something new. Lindsey and his staff quickly realized it was more important than ever to check in with youth and ask how they were feeling.

said Lindsey, who explained that they even added a lesson about what a virus is. “We have kids that didn’t go to school, that didn’t see their friends, that didn’t get to see anybody, so that really affected us.”

It’s essential, Lindsey said, to remember that these young learners are going through an incredibly tough time. That message tied in closely with the advice he would give parents and educators during this period: Have grace.

“Our kids have already experienced a lot of trauma,” he said. “Our kids use school as an escape, to get a meal, to see their friends, to see teachers that they like — positive adults. Because in the real world, everyone doesn’t have the home environment that many of us are blessed to have.” 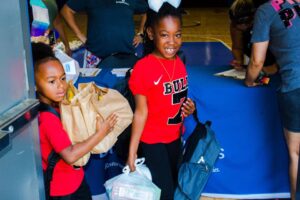 This approach to social and emotional needs is something Lindsey and his staff plan to continue this fall with their youth programming. “Of course we want to have fun and we want their input on the programming, but we just need to check the temperature and gauge how they’re feeling in their everyday life.”

On Aug. 8, BridgeBuilders held its annual I Got Your Back night, where local youth are able to pick up backpacks filled with toiletries and school supplies. This year, the event — which was a drive-through service — distributed 300 backpacks. “It meant more this year because we wanted the kids to get some semblance of normalcy,” Lindsey said. “Like, ‘Hey, let’s get excited to go back to school.’”

And although, just like the new school year, BridgeBuilders’ youth programming will look different for the time being, the nonprofit’s approach remains the same: to reach out to communities and find ways to make an impact. It’s a plan that’s served them well so far. “We pivoted,” Lindsey said, “but we were able to shoot and still make the shot.”