Parents’ Perspective: How The Fellowship Initiative Is Empowering Young Male Leaders of Color 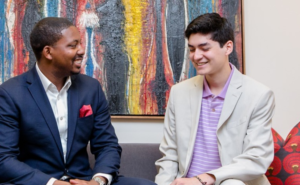 For three years, Saturdays meant one thing for the Fucuals family: The Fellowship Initiative (TFI).

A leadership program offered in partnership by JPMorgan Chase and Big Thought, TFI is designed to support young men of color with college aspirations and equip them with the skills, knowledge and networks they need to succeed both academically and professionally. Since launching in 2010, TFI has supported more than 350 Fellows in New York, Los Angeles, Dallas and Chicago, with high school graduation and college acceptance rates of 100 percent.

“TFI is a program about doing something to create more leaders of color to combat the systems that have been in the United States of America since its founding,”

Alicia and Reginald Fucuals’ son, Drake, was a member of the first Dallas cohort, which began in 2017. TFI Fellows join the program as sophomores in high school and are placed in a cohort of 40 other youth until graduation. For those three years, the Fellows meet three Saturdays a month during the fall and spring semesters, in addition to roughly three weeks each summer. Beyond academic rigor and preparing for college-readiness, TFI places a heavy focus on mental and emotional health.

For the Fucuals, TFI was a way to reinforce values like leadership and community service that they’ve always instilled in their son, while also providing him with the opportunity to experience those lessons outside the home. “As we watched him Saturday after Saturday after Saturday, we noticed that he was actually growing from it,” Alicia said. “[The program] allows them to have more confidence and to realize that, as they become adults, there’s a whole world out there for them to venture into, and that the sky is the limit.” 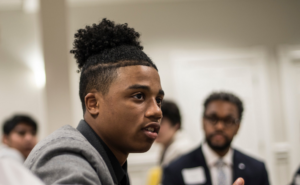 But TFI isn’t just about telling the Fellows that they can do anything, Alicia added. It’s about showing them what that looks like and helping to pave the way for them to reach their full potential.

Along with gaining a positive self-image and a brotherhood, Banchs said, TFI Fellows are exposed to fields of study and professions that are occupied by people of color but not typically advertised to them. They go on multiple college tours — both in- and out-of-state — and they’re surrounded by people who believe in their ability to attain their dreams. “But most importantly, they realize that everything they ever needed was always inside of them,” Banchs said. “We just helped turn the mirror to face them so they could see just how beautiful, intelligent, thoughtful, creative and savvy they have always been.”

Over the Fucuals’ three-year experience with TFI, their son participated in everything from a mural-painting project in downtown Dallas to Outward Bound, a rafting trip down the Colorado River. The wilderness expedition was an exercise in looking out for and leaning on one another, as well as taking responsibility during a physically demanding experience.

The Fellowship Initiative also consists of a mentorship component: Professionals from a variety of backgrounds and circumstances come in and work with Fellows. Each Fellow is assigned to a squad of peers, and each squad is assigned three to four mentors.

“For our son, TFI kept building on the foundation that we already laid,”

Reginald said. “But some young men may not even have a foundation. This program can lay that out for them and give them the hope of saying, ‘OK, I can do this,’ or ‘I can go there,’ because the program exposed them to more things than what’s just in their neighborhood.”

This school year, Drake began college in Kansas. Although their TFI Saturdays are over, the Fucuals hope their son continues to feel the impact of the program throughout his college career and beyond.

“I think it’s going to be interesting to hear from these young boys a year or two from now, to see how they cherish and value the experience that they had — not just from a travel standpoint, but from those Saturdays when they didn’t want to get up and go,” Reginald said. “And prayerfully, all of the young men as well as the parents can say that it was worth it.” 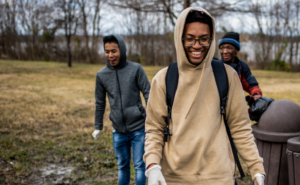 The Fellowship Initiative – Dallas is currently recruiting for its next cohort

To nominate yourself or a potential Fellow, and to learn more about the program, visit: https://www.bigthought.org/who-we-are/our-programs/the-fellowship-initiative/