Keeping promises: How one initiative is helping high school seniors succeed after graduation 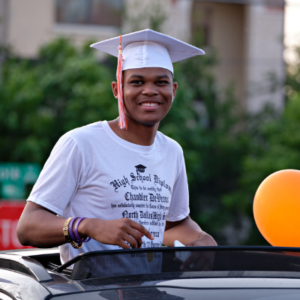 Do you remember what it was like to finally graduate from high school and begin your college journey? Who helped you navigate the world of scholarship applications, tuition loans, selecting classes, considering majors and minors and starting your journey toward adulthood? Many of us had people to guide the way. Not everyone has that type of support system.  For the 75 percent of Dallas County students who are economically disadvantaged, finding a way to afford college — let alone navigate the process of applying and enrolling — can be challenging. But it’s one that the Dallas County Promise is tackling head-on.

After a few years of focusing on students and analyzing data, the Dallas County Promise team identified a need to add an additional layer of support for Scholars, especially in their pivotal senior year. Thus the Champion Initiative was born.

This support builds on the assistance provided by Dallas County Promise, which aims to remove the financial barrier to college by providing tuition-free education. Promise Scholars receive a “last-dollar” scholarship to cover any gap between what a student’s state and federal financial aid covers and the cost of tuition at a Promise Partner college.

As part of the Promise Champion Initiative, scholars are paired with a volunteer advocate, or Promise Champion, to help them meet critical benchmarks post-graduation. These Champions meet weekly with their students and offer support that includes everything from helping them complete their Free Application for Federal Student Aid (FAFSA) and Texas Application for State Financial Aid (TAFSA) to setting career goals. 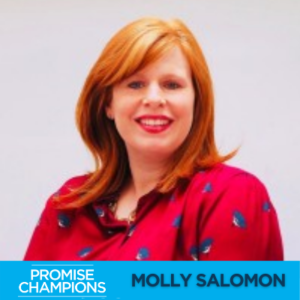 For Molly Salomon, a first-year volunteer Champion and the Assistant Director – Special Programs, Outreach and Marketing, Strategic Initiatives at Dallas College, the process has been a rewarding one. “It’s been really great to see what motivates [my Scholar] as an individual, what he wants to do in terms of his long-term goals and what he wants to accomplish in his life,” Salomon said.

Salomon and her Scholar first exchanged messages in June before meeting virtually in July — the pandemic prevented any in-person meetings, but the pair were still able to strike up a connection. Together, they also met with the Scholar’s mother and all got to know one another. “I got really excited because he was so excited about going to college,” she said.

But once her Scholar graduated had from high school, there was what Salomon described as an “unfinished” feeling. Without his high school support system, which included a counselor and teachers, it was unclear what his next steps should be and who he could reach out to for help. When Salomon and Isiah first connected, she asked him to rate his stress level. “And it was high,” she said.

This was where Champions can step in and be a resource

But this was where Salomon, as a Champion, could step in and be a resource — she could help her Scholar complete his enrollment checklist, navigate the enrolling process and review his class schedule with him. And as their relationship developed, Salomon continued to check in. “He keeps reporting lower and lower numbers of feeling good about this whole process,” she said. “That’s how I know that we’ve been successful.”

Beyond helping students plan and prepare for post-graduation studies, Champions also have the opportunity to help with soft skills that will be invaluable in college and beyond. Salomon was able to give advice on professional communication and email etiquette — including the art of a carefully crafted follow-up email. “Part of being a capable adult is the ability to adapt and be flexible and be nimble,” Salomon said. “So, throughout this process, I’m showing him examples of how this might play out later on throughout his education and when he goes into the workplace.” 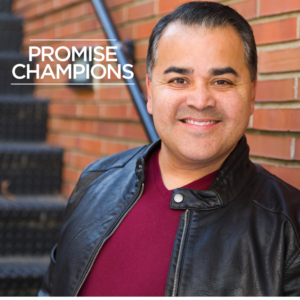 It’s this one-on-one guidance that the Promise Champion Initiative hopes will empower Scholars and positively influence their success, both in post-graduation studies and beyond. For Salomon, it’s mentorship she’s happy to provide and something she hopes to continue doing — including for her Scholar, who’s now in his first semester of college.

“I really don’t see this as a short-term relationship,” Salomon said. “I’ve always told my Scholar, ‘I’ll be as helpful as you want me to be and I’ll be here as long as you need me to be.’”

Want to get involved?

Learn more about how to volunteer to become a Promise Champion.