Offered in partnership with JPMorgan Chase and Big Thought, The Fellowship Initiative is a leadership program designed to support young men of color with college aspirations. Fellows enter the program as sophomores in high school, and for the next three years until graduation, TFI prepares them for their entrance into the professional sphere and empowers them to be positive leaders in their communities.

Since launching in 2010, TFI has supported more than 350 Fellows in New York, Los Angeles, Dallas and Chicago. The Dallas arm of the program saw its first group of Fellows, known as a cohort, complete the program at the end of the 2019–20 school year.

Big Thought’s Armando Banchs, the Director for TFI Dallas and the Director of Creative Voices, and Sean Walker, the Program Manager for TFI Dallas, shared a little more about the initiative and how it’s changing the lives of young men of color — as well as their own.

Tell us a little bit about yourself. Where did you grow up, and how did your path lead you to Big Thought?

Armando Banchs: I’m proudly an Army brat. I grew up moving to a different place every two to three years: Texas, Puerto Rico, Greece, Italy, Texas, Germany, Washington State, Korea and back to Texas for high school. I had worked off and on for Big Thought in multiple capacities for 10 years before coming on full time on September 30, 2017. That date is emblazoned in my mind because my last day as a classroom teacher was September 29, 2017. My last two weeks were filled with loving and heartfelt tears and goodbyes, but I knew I was leaving to do what I had continually charged my students with: Follow your passions and help make the world a better place. I felt leaving my beautiful fifth graders for The Fellowship Initiative was that next step in helping to do my part to create equity and opportunity in my world.

Sean Walker: I’m born and raised in Dallas, and I split my childhood between the Pleasant Grove and Oak Cliff neighborhoods. After attending the Law Magnet at Townview for high school, I attended Texas A&M and Dallas College before eventually graduating from The University of Texas at Dallas with a degree in Emerging Media and Communications. I originally joined Big Thought as a high school intern my senior year in 2008, and I’ve worked for the organization at various points over the years. I’ve been with The Fellowship Initiative since November 2017.

What motivated you to join the Big Thought team?

AB: I believe in our mission. We are truly trying to fight systemic racism and offer all the opportunities and experiences that our white middle-class youth receive to the communities of color we serve. A youth’s parent’s income, “ethnic” sounding name, melanin count, gender, or sexual orientation should not be predictive markers for determining a youth’s future. I believe in action, and TFI is a program about doing something to create more leaders of color to combat the systems that have been in the United States of America since its founding.

SW: TFI specifically spoke to me as a black man who was once a black boy trying to navigate the college space. There are many hidden steps toward the college goal that many learn through failure, and I saw TFI as a way to truly prepare young men for the next step in their education. TFI was also a new direction for a Big Thought program to head in, and it was exciting to see the organization that I had observed for so long address a different demographic with a different mindset. The chance to truly share opportunities with young people of color through quality programming and community building under empathetic management was too good to pass up. 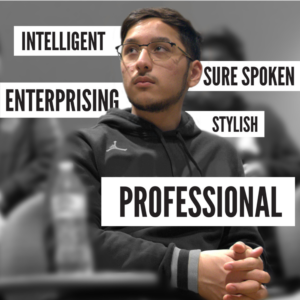 What do you see as the value of TFI?

AB: I believe that The Fellowship Initiative actively challenges the presumption that young men of color cannot be leaders and affect positive change not only in their communities but also the United States as a whole. TFI strives to show our program youth and the communities we expose them to that these young men and their family members have a right to be in those spaces as well. This program is about making sure our TFI Fellows continue to realize that they are, and have always been, good enough to be wherever they wish to see themselves. TFI is also about community building and brotherhood development. These young men are going to need their TFI brothers as they continue to help break down walls and ceilings and broaden the minds of others.

SW: On the surface, TFI is all about going to college and professional development. In reality, it’s a radical experiment on what a community of color would look like with access to the same support and exposure to opportunities that wealthier, whiter communities get without thinking about it. We obviously put a heavy focus on academics, but the reality is that college acceptance is about much more than just grades. Youth have lives that exist outside the classroom and all of those experiences have an impact on their chances of graduating with college qualifications.

What do TFI Fellows gain by participating in the program?

AB: The TFI Fellows gain positive self-imaging. They gain skills in combating imposter syndrome; they gain a brotherhood, a family that believes in them. They see folks who look like them believing in their ability to attain their dreams — especially dreams that aren’t associated with a hoop or goal. They are exposed to fields of study and professions that are occupied by people of color but not advertised for them or shown in television or media as stereotypical jobs for men of color to possess. But most importantly, they realize that everything they ever needed was always inside of them. We just helped turn the mirror to face them, so they could see just how beautiful, intelligent, thoughtful, creative and savvy they have always been.

What strengths do you bring to TFI Dallas as a program leader?

AB: I have worked hard for 16 years to be an educator who believes in all of his students and advocates for all of his students. I also continuously surround myself with amazing educators and mentors to continue my own education and mentoring skills. But mostly, I’m willing to acknowledge that I don’t know everything. I’m willing to find and work with experts in their fields of study to create a program that works for the TFI Fellows in every cohort. I know that our program will — and has to — evolve as our cohort does, but I would never substitute or select anything inferior because our Fellows deserve the best.

SW: I’d like to think my willingness to acknowledge that we don’t have all the answers is a strength. The program’s goals are noble and necessary, but we have to be willing to adapt in order to maximize our potential. These young people are experts on themselves and their needs. Engaging their expertise assists me in making the program more impactful. I also lived as a young man of color trying to get to college. Some things have changed, but I remember the lessons I had to learn the “hard way.” My hope is to pass along that wisdom to another young person, so that they won’t have to navigate the trauma that comes with those experiences. 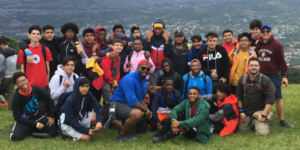 What is one of the most inspiring things you’ve seen or learned while working with TFI?

AB: Youth will always meet your expectations — and that is a double-edged sword. If we expect their worst, we should get it. But if we communicate with our youth, if we meet them where they are, and if we remind them that we expect their best and are simply here to assist them on their road to discovering what their best is … then there are no borders or limits to what our youth can accomplish, now and in the future.

SW: The most impactful moments usually reflect how these young men have formed a community around each other. We had a student who stopped attending programming and responding to messages for months. For the sake of privacy, I don’t discuss issues in front of other Fellows, but I did ask the group if anyone had heard from this student because we wanted to make sure he was OK. Two weeks later, he walked back into programming. He told me he’d struggled with feeling accepted at home and let that doubt factor into whether or not he was truly wanted anywhere. The longer he stayed away, the more guilt he felt about not feeling accepted if he were to return, even though he wanted to. It wasn’t my messages or the staff that brought him back — it was the outpouring of messages from his peers that drew him back in. Having young black and brown men comfortable with loving each other, being loved and expressing that love is a process. In that moment, the three years of work we’d poured into the program was validated for me, and it had nothing to do with a college acceptance letter.

The Fellowship Initiative Dallas is currently recruiting Fellows for its next cohort. To learn more about the program or to nominate a Fellow, click here.

Read next: The Power Of Social And Emotional Learning: Why SEL Is More Important Than Ever
MENU