Truth vs. Perception: The Importance of Possibility

Big Thought presents Truth Versus Perception, a multi-part series that intimately explores and shares experiences of the Fellows of The Fellowship Initiative and supporters. This multi-part series is designed to dispel the negative, perceived notions of young men of color.

These are their words. Their experiences. Their truths.  Listen and unlearn. 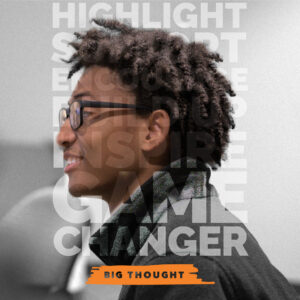 “Growing up, everybody around me was Black, so the issue of race was just not a part of my vocabulary,” he said. “My first understanding — and this internalization of how deeply rooted race issues were in the U.S. — was when I was in college.”

Chase Auto CEO Peter Muriungi was born and raised in Kenya, but distinctly pinpoints two encounters that clearly made him aware of being a Black man in America.

The first, after he stopped on a dark East Texas road to help two men whose car had broken down on the side of the road. When Muriungi got out of his car, they approached him with weapons. “I said, ‘It looks like you needed help. I stopped to help you,’” he recalled. “At the time, I didn’t realize what was happening, but they were shocked because they could see the color of my skin, which I wasn’t seeing.”

The second came as Muriungi was driving from his dorm to a class. Right outside of his classroom, a campus police officer pulled him over, lights on, to ask if he was smoking weed. “Afterward, I went into class and I said, ‘I wonder why the policeman was so upset.’ And the person next to me says, ‘You don’t realize what just happened, what he was doing, do you?’”

For Muriungi, those experiences represent his earliest recollections of realizing just how deeply entrenched racial issues are in the U.S. and how often they unfairly affect the future of young men of color.

“My interest in TFI is rooted in the really different outcomes — not only by race, but within race by gender — for Black and Brown men in terms of education and incarceration rates and so on,” he said.

To truly understand the city where you live, Muriungi has a suggestion: Visit the court system, sit down, and spend the day there. It will help you form a deep appreciation for one of the nation’s most pervasive problems: the stark differences in outcomes in the judicial system for Black and Brown men when compared to white men. “The idea that that can occur is, to me, the strangest thing that we’ve come to normalize because it destroys generation,” he said. “It’s just not about the person you incarcerated — it’s the whole line that comes after them.” It’s this issue that drives Muriungi’s passion for The Fellowship Initiative (TFI), a three-year leadership program launched by JPMorgan Chase in 2010 to support young men of color with college aspirations. Youth join TFI as high school sophomores and continue until graduation; over the years, the program focuses not only on academic rigor and college-readiness but also on providing opportunities that wealthier — and whiter — communities receive.

“The most important thing, in my point of view for a 15-year-old, 14-year-old, 13-year-old
is to open their minds up to the possibilities.”

Muriungi serves as the executive sponsor for TFI Dallas, which is offered in partnership with Big Thought, where he’s also a board member. TFI can be a way to help young men change their outcomes, dispel stereotypes and explore opportunities they may otherwise not receive because of their race.

“I know that many people have sacrificed for the opportunity that I have found here,” said Muriungi. “I’m deeply appreciative for that and although progress has been made, work remains. I hope to do my part with the chance that I have been given.”

TFI provides a way to fight back against systemic racism and ensure young men of color receive the resources they need to succeed professionally and personally. TFI shows Fellows what’s possible — whether through college tours, opportunities like Outward Bound, a wilderness leadership expedition, or professional mentorship.

The latter is something that’s always been important to Muriungi, who prefers to use the word “sponsorship,” which he feels has a deeper meaning. “When you invest time in changing outcomes for someone, it’s incredibly important.” (In fact, one fellow JP Morgan Chase employee who Muriungi began sponsoring years ago is now a TFI Dallas mentor himself.)

But it’s TFI’s ability to enlighten youth to different opportunities that Muriungi describes as game-changers. “It’s human nature to put in effort based on what the return for that effort will be, and if you think the return for that effort is narrow, then it influences how much effort you’re willing to put in,” he said. “The most important thing, in my point of view for a 15-year-old, 14-year-old, 13-year-old is to open their minds up to the possibilities.”  #ThisIsBigThought

Applications for the next cohort are now being accepted for high school sophomores.

Read next: Out of School Time Keeps Learning All in the Family
MENU
DONATE